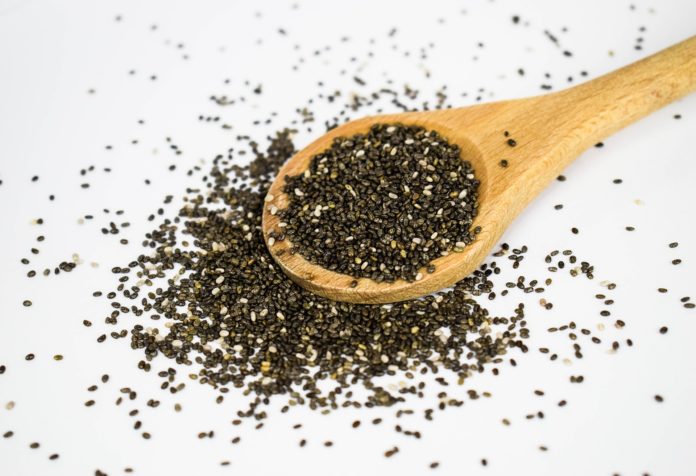 Chia Seeds look as if they are making their way into most Americans and people around the world’s diets. There’s a good reason for this: chia seeds are a versatile nutritional source known as a superfood.

Don’t be fooled by their small size; chia seeds are a concentrated nutritional source, that will help most people in their health journey. I personally use Chia Seeds in my after workout smoothie, my wife buys this brand and it’s great.

As reported by the USDA, two tablespoons of these seeds consist of less than 140 (one hundred and forty) calories, about five grams of protein.

The seeds consist of all the nine vital amino acids which cannot be produced by the human body.

Chia seeds are excellent sources of fiber, providing nearly eleven (11) grams in a single serving. They mainly consist of soluble fiber; the seeds tend to enlarge and form a gel whenever they come in contact with H2O (water).

When digested, this gel will add bulk to your stool, assisting in keeping you regular. The seeds will also help in making you feel fuller and preventing constipation.

Types of Chia Seeds and Products

Black Chia seeds come from a Chia Plant with purple flowers. These seeds are not black, but instead, they come in various shades of brown. They are known to have a high protein value, antioxidants, and fiber.

White Chia Seeds come from Chia Plants with white flowers. However, these seeds will either be gray, yellow, or white.

As for the nutritional distinctions between the two colors of seeds, the white seeds are a little bit higher in protein as compared to the black seeds, however; the black-colored seeds are higher in antioxidants and fiber.

A typical health food store will sell a mixture of these two seeds so that you could enjoy the benefits that both offer.

Chia seed oil is offered by the Raw Food World, which keeps much of the Omega-3 fatty acid and minerals of the original chia seeds, but in a more concentrated form. It is being used to grow hair and incorporated it into skincare routines. We have a favorite Chia Seed oil that my family uses to follow this link to check it out.

These types of chia seeds are grown on small agricultural farms in their organic habits, both chemical-free, and pesticide. Health-works sell out naturally grown chia seeds, as well as many other health food vendors.

Chia has been utilized as raw material and food for medicinal purposes as early as 3500BC. For decades, chia seeds were used as a staple in the meals and diets of tribes in the Southwestern United States and Mexico and have also been utilized as a major source of energy during conquests and long journeys.

The seeds, which initially entered the contemporary market adorning small clay figures, have now been recognized and known for their numerous nutritional benefits.

Carbohydrates, Calories, and Protein
Chia seeds, just like every other nuts or seed, are highly concentrated sources of calories. Surprisingly, three tablespoons consist of 179 calories.

For an individual on a 2,000-calorie per day diet, this is simply over 11% of the daily value. A single serving offers six grams of protein and fifteen grams of carbohydrate.

These seeds pack several amounts of calcium in a little serving. Three tablespoons are serving consists of 233 milligrams of calcium.

The recommended calcium intake for adults is 1,000 milligrams daily. The total amount of calcium in a single serving of chia seeds is, however, slightly lower than the total amount present in a cup of milk.

Furthermore, a single serving of chia seeds contains 2.8 milligrams of iron, and other essential nutrients like potassium, zinc, phosphorus, and magnesium.

Chia can be sprinkled over cereal or salads, poured into yogurt or mix into almost all kinds of recipes. For years now, the world of witness a massive explosion of chia seeds in various products including, snack bars, granola bars, beverages, chips, and crackers.

These seeds do not require to be ground and don’t go bad the way other flaxseeds do.

Chia seeds are derived from a plant known as “Salvia Hispanica L. and were at a particular time a primary food crop in Guatemala and Mexico. As early as 3500, these plants were cultivated as a good source and were offered to Aztec goods for religious ceremonies.

These seeds do not follow the usual commoditization trend, since the market isn’t too big yet, where supply is somewhat unstable, and there is also a lack of information and awareness of the top-quality standard demanded by big industries.

But, as more consumers are getting aware of chia seeds and all its benefits, the market will more likely experience a tremendous increase in the future, worldwide.

The increased demand for multi-cereal products and ancient nutritional grains as essential foods are accelerating the demand for chia seeds. These seeds are high in protein and gluten-free.

The gluten-free property is expected to generate a strong demand among potential consumers that suffer from gluten intolerance (a celiac disease), or those individuals who just avoid gluten due to their lifestyle choices.

Scope of the Report
Chia is a native of Guatemala. It can be easily grown in the dry, long climate of South American nations, such as Peru, Bolivia, and Ecuador, among others. About 80 percent of the amount of chia supply in the world comes from Latin America. It’s one of the most sought after small seeds because of its many benefits.

Why Stress is More Harmful to Your Health Than You Think

The Problem with Man Boobs

Which Resources Can Help Me Overcome an Addiction?